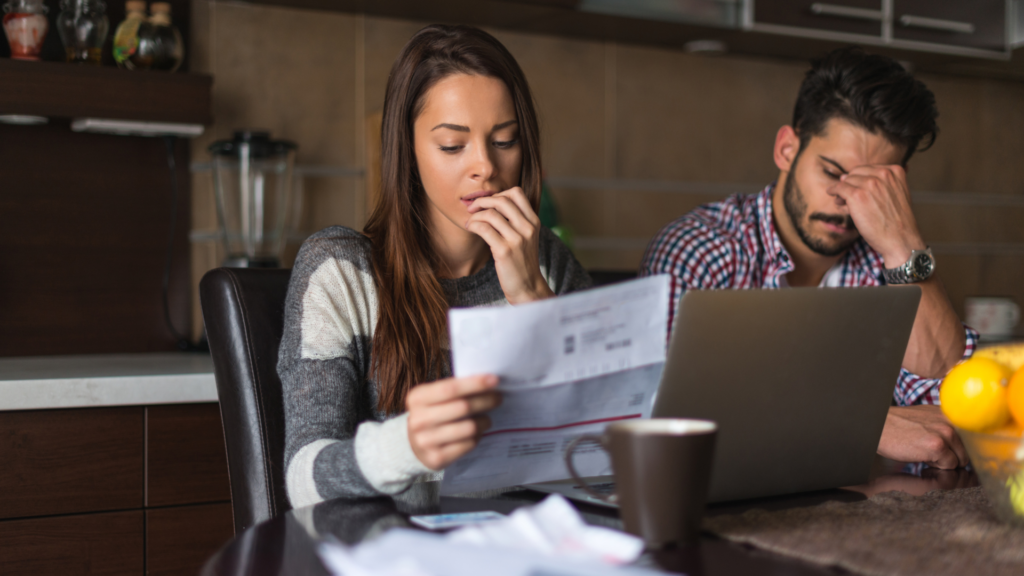 “Young people feel that older people have left the building, that they’ve checked out.”

~ Britt Wray, a leading researcher on the mental health impact of climate change

Maybe it’s the emotional burden of having to pick up the pieces alone that’s worrying Gen Z.

Here’s the thing, though: it’s not like they haven’t been crying out for climate commitments – and not just from the government, either.

Last year, 64% of the 18-22-year-olds surveyed by Bupa said it was important for their employers to act on environmental issues. In fact, up to 59% would even stay with those employers longer if they were responsible; not to mention the fact that over half (51%) of young people would take a lower salary if the company was climate-conscious.

But there might not be quite so much take up for that anymore, though.

Climate vs. cost of living – what’s changed for Gen Z in a year

According to the Office for Budgetary Responsibility, the UK is about to see the biggest decline in living standards on record – this year and into the next.

And who’s set to be hit hardest?

In fact, recent research by Deloitte revealed that the cost of living has now become this generation’s biggest concern – knocking climate change off the top spot.

But when over 70% of low-income households with an 18-24-year-old are now in arrears with at least one household bill – not to mention the fact that 77% of a student loan is swallowed up by the spiralling cost of student accommodation – how could it not be?

These financial woes aren’t just affecting Gen Z’s day-to-day, though; the cost of living is painting an even bleaker picture for tomorrow. Over half (51%) of 18-25 years are reportedly finding it impossible to save for the future, whilst 33% are even unsure they’ll be able to afford a property or start a family. If that wasn’t sad enough, the spiralling cost of living is affecting Gen Z’s career aspirations before they’ve even had a chance to get a foot on the ladder.

“I don’t feel ‘career-minded’ – it seems like most of the jobs out there will overwork me and underpay me. The things I imagined myself doing as a child, I no longer imagine myself doing – things like buying a house, having a stable job, or getting married,” says Amy, 22, from Hertfordshire. “It’s disorientating sometimes – I don’t imagine I’ll ever have financial stability,” she told Sophie K Rosa in Generation Precariat: What’s It Like to Feel Robbed of Your Future?

The problem is, some still feel there’s too much stigma to ask for help. Recent research has revealed that as much as 68% of those with money worries would not talk to their employer due to shame and embarrassment; that’s despite the fact that 24% worry about money every single day.

Breaking the stigma and starting the conversation with employees

The latest Deloitte CFO Survey revealed that 31% of Gen Z respondees were more anxious about the impact of surging prices than anything else.

Something that, much like climate change, can feel entirely out of their control.

Well, the good thing is that the government has taken some measures to help young people. For example, on top of the £66 per month off energy bills over six months, those on means-tested benefits such as universal credit will receive a £650 payment. Vital when, according to the chief executive of the YMCA in England and Wales, Denise Hatton, close to 800,000 of those on universal credit are aged between 16 and 24.

However, some experts believe that employers need to step in to support the youngest members of our workforce – especially if they’re struggling to speak up.

“Concerns around the cost of living and climate change are likely to continue to disrupt the lives and mental health of Gen Zs and millennials. Employers need to play a stronger role in supporting them by listening to their needs and taking action,” says Will Gosling, partner and human capital lead at Deloitte.

But what do employees need the most right now?

Randstad asked 2,022 UK workers about how they expected their employer to help. Here’s what they were hoping for:

But when vacancies are at a record high, ensuring your employee value proposition is as attractive  – especially in a cost of living crisis – is more important than ever.

But does talent really want to move positions in such a rocky economic time?

“While the economic environment may encourage people to stick with their employer, causing a slowdown in the “Great Rotation” businesses must not miss out on the unique opportunity to create a more content and productive workforce. Those who feel supported now, are likely to remain loyal even when times aren’t as tough,” says Noordende.

The thing is: when the cost of living crisis is affecting everyone’s bottom line, what can employers actually do to help? Well, besides cranking up the salary – anyway.

WEALTH at work commissioned a survey of over 2,000 UK adults earlier this year to assess the financial well-being of the nation. The results uncovered just some of the things employees can do to help any staff who are struggling right now. Importantly, these ones don’t have to cost the Earth either:

But there are even simpler things you can do to help. Ensuring your organisation is flexible about working from home allows staff to save on travel expenses. And if employees do come into the office, why not provide some free meals or snacks from time to time? The digital industry could take a lead from initiatives being spearheaded by the retail sector at the mo; since October, Sainsbury’s has been giving workers access to “basic food items” during their shifts. Crucially, this organisation didn’t wait for its staff to ask for help. And when there’s such a stigma about financial insecurity – WEALTH’s survey showed that 23% of 18 – 34-year-olds feel “embarrassed” by financial worries – starting the conversation is key.

Even beyond the looming dread of climate catastrophe, it’s this that Gen Z is dreading the most now. But when the younger generation is set to make up 27% of the workforce by 2025, it’s fair to safe to say their concern is ours as well.