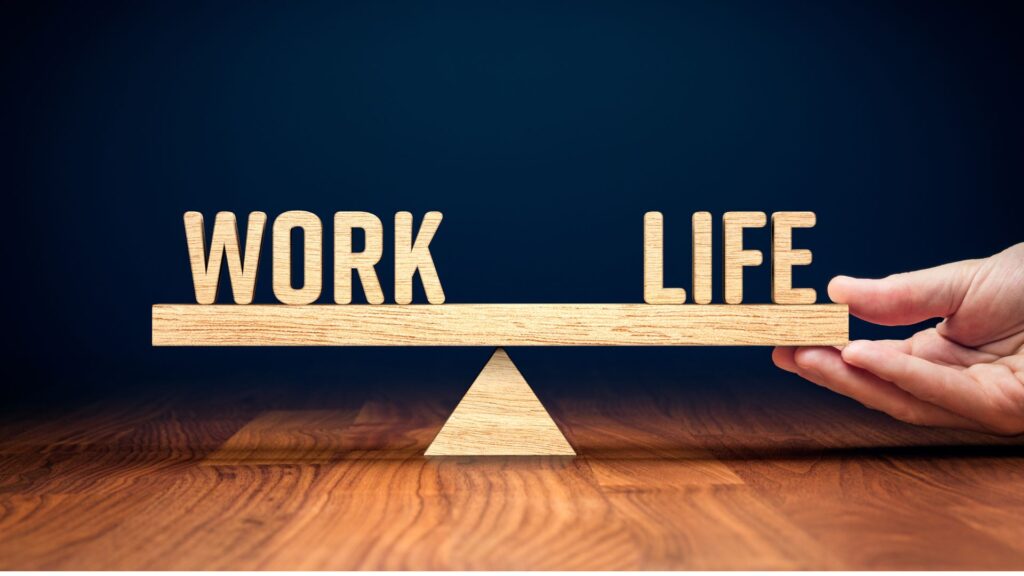 That’s because, for all its perks, remote work has blurred the lines between being on and off the clock.

And there’s plenty of research to support this too.

According to Statista, over 65% of UK workers are feeling unhappy with their work-life balance. Gen Z is the least satisfied, with only 34% saying they’ve found a healthy blend.

But this doesn’t just affect staff; it poses a problem for employers as well.

‘The Great Resignation’ has seen employees leaving their roles in droves, with no sign of stopping any time soon. According to the CIPD Good Work Index 2022, 24% of employees plan to leave their jobs in the next 12 months for ones that offer a better work-life balance.

Basically, something’s got to give.

But before we get into all that…

OK, there’s a common assumption that Gen Z is the “hustle generation”. And with 48% of zoomers having secondary income streams (compared to 34% of small business owners), there’s no smoke without fire.

But is this lifestyle tenable long-term?

Perhaps, for some. But the fact that ‘quiet quitting’ has appealed to so many would suggest otherwise. What’s more, research suggests money isn’t everything to today’s workers – even zoomers.

This year, Aviva asked 2,173 employees what workplace benefits appealed to them. Interestingly, the research revealed that 41% were attracted to their current role because of the work-life balance it offers; that’s compared to 36% who cited salary as the main draw.

With these figures in mind, a healthy work-life balance certainly seems important to a proportion of your employees at least.

So what can you do?

Whether you’re a founder, CEO or manager, you’ve likely got the best of intentions when it comes to staff wellbeing.

But telling them to leave on time or not check emails at the weekends isn’t much good if you’re sending them after five.

We do get it, “there aren’t enough hours in the day” – but it still sends mixed messages. Especially to Gen Z who aren’t entirely sure what ‘normal’ work life looks like yet. These younger workers are often left feeling anxious that they’re not doing “enough” – amplified by the distance that remote working’s created. One study into workforce engagement and retention revealed that 51% of younger remote employees were worried their manager “had doubts about their productivity.”

But even if you’re unable to stop working late or send emails at weekends, though, you can still make subtle changes inside office working hours. Just start by changing your Slack status to out for lunch between 12-1. You can even take a snap and set it as your emoji these days. What a time to be alive.

But it’s not just lunch breaks that are important.

From increasing productivity to reducing stress, various psychological studies have demonstrated the benefits of micro-breaks.

In one study, participants were asked to carry out various tasks which were broken up by short breaks of up to 10 minutes. Then, the results were compared against participants who either had no break or were following their usual routine. The results revealed that 64% of the group who took micro-breaks scored above the control group for both vigour and fatigue.

“When taking a short break when we feel the need to, we can notice that new ideas start to flow easily again, or effortlessly can pay attention to what we do,” Patricia Albulescu, lead author of the research, told The Guardian.

But these mini excursions from our desks aren’t anything new.

Back when we worked in the office, it was normal to go catch up with colleagues around the coffee machine at various points in the day, wasn’t it? And while more experienced workers are comfortable breaking up their days this way, this unspoken ritual may be lost on those starting their first roles remotely.

So why not make it a point when onboarding remotely that this behaviour isn’t just OK, it’s actively encouraged?

Check-in on workloads (and their headspace)

When we interviewed a selection of Gen Zers and millennials, there were a couple of things both groups agreed on: the importance of work-life balance and manageable workloads.

“Supervisors should ask about the workload and not apply too much pressure,” said Romain (20), whilst millennial Maeve (26) agreed that reducing workloads to a point that a business can still be successful and retain staff was a good idea.

Of course, we know that this isn’t realistic for every organisation; especially those that are stretched thinly. However, taking the time to check in on how staff are managing can make the difference between an employee cracking on or checking out.

It also gives you a good opportunity to make sure everything else is OK.

Recently, we talked about the importance of checking in on the mental health of employees – especially from afar. Without regular physical contact, many can end up feeling isolated, alone and unsupported. Making a little extra effort to keep in touch and asking twice: “is everything actually OK?” can go a long way.

But what if they’re not?

Take a look at time off

OK, we might be on the brink of a four-day working week. But until then, it’s important to stay on top of our relationship with annual leave. After all, it wasn’t long ago that many were sacking off their holidays completely because there was “nowhere to go”.

But that isn’t really the point, is it?

Proper time off, even at home, helps us tune out and recharge. In fact, research shows that regular holidays can be more important than exercise or a healthy diet; the University of Helsinki tracked 1,200 middle-aged male executives over 40 years and found those who took less than 21 days of holiday a year had a higher risk of early death.

But is 21 days even enough?

That’s a question many modern organisations are now asking themselves. In fact, one in five companies offered their employees more annual leave last year (according to research by Challenger, Gray & Christmas).

And some are going even further than traditional holidays.

Kate Compton Barr, CEO of Pip & Grow, noticed the exhausted expressions on the faces of her employees in a Zoom call and decided to pause operations for the month of August and give her staff four weeks of paid leave.

“I just recognized that instead of asking them to hustle, I needed to ask them to rest,” says Compton Barr, 39. “This is a long-term investment for us in making our staff feel appreciated,” she told Kristin Stoller for Forbes.

Again, this isn’t a one-size-fits-all solution. But it does raise important questions about how much we’re wired to take when it comes to WFH.

At the end of the day, how much you can “take” probably looks different from the next person – and that’s OK.

There’s no perfect solution that suits everyone, that’s for sure. But when so many employees resent their jobs – often due to long hours leaving no time for life outside work – isn’t worth having the conversation at least? Even if you don’t have the solution right now, just acknowledging the imbalance could be enough to keep them around a little longer. Because in today’s war for talent, a healthy work-life balance’s one job that won’t wait ‘til tomorrow.