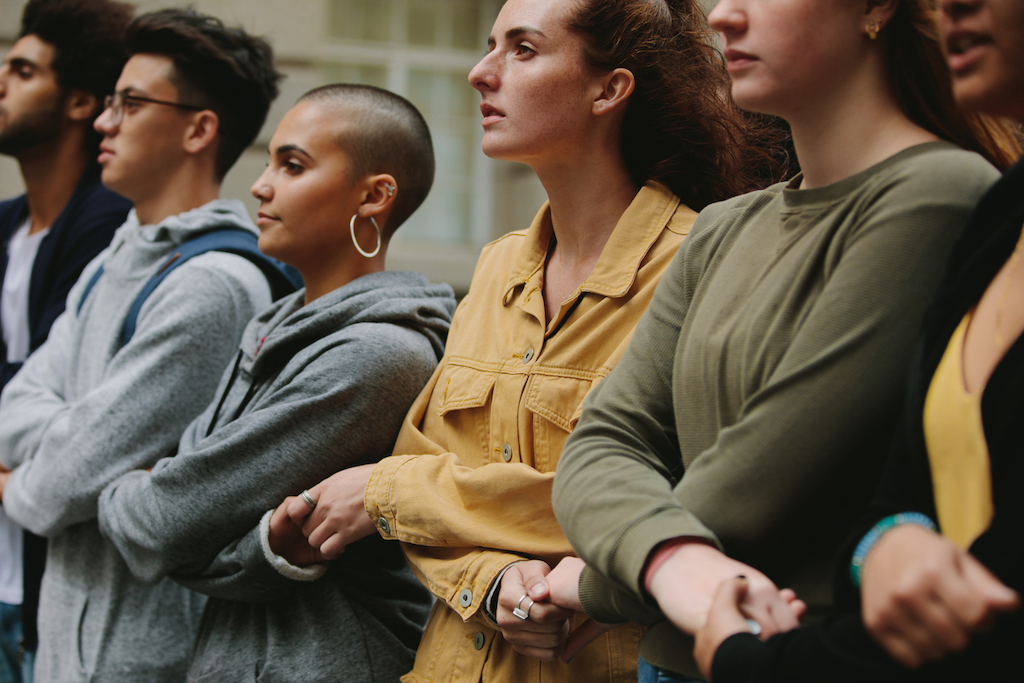 So, what do you stand for?

That’s a question many “zoomers” are asking today’s brands before following them. That’s if the findings from a recent study by Forrester are anything to go by. This research suggests 51% of Gen-Z consumers want brands to be aligned with their own values before buying from them.

In fact, according to 5WPR’s 2021 Consumer Culture Report, 45% of this age group actually boycotted businesses that don’t share their social and political beliefs.

But this generation isn’t just looking for a sense of purpose in the products they buy; now more than ever, the business they work for’s got to stand for something too. For example,  research by DoSomething found 75% of Gen-Z respondents wanted to see brands prioritise employee safety in the workplace.

For Gen-Z, ”purpose” isn’t a catchphrase to slap on a packet or pepper throughout your online policies – not out of obligation, anyway.

Instead, it’s a standard they expect their employer to swear by.

Still not concerned about what this “woke” generation’s worried about? Well, now’s the time to start. Because in just three years, Gen-Z workers will make up a whopping 27% of the workforce.

This is a demographic your business simply can’t afford to ignore. But how do you attract the best and brightest Gen-Z talent?

Look beyond exponential growth and stand for something that matters.

But finding that “higher purpose” is a daunting task, especially for established businesses. The last thing you want to be is inauthentic, so where on Earth do you start?

Begin by ensuring your company values are aligned. And not just to the needs of your customers but with those of your future employees too.

Because the most recent annual Deloitte Global Millennial and Gen Z Survey revealed 49% of Gen Zs surveyed made choices about the types of work they would do—and the organisations they’d work for—based on their personal values.

But what’s most important to Gen Z?

From Deloitte’s research, Parmelee suggests racial justice, inequality and climate change top Gen Z’s priorities. And attracting this group “…could mean ensuring the environment remains a priority, even in challenging times. Or reevaluating the way their organisations look at hiring and retention to promote diversity and inclusion,” she says.

And that’s the point. Many organisations claim to be diverse, inclusive or sustainable, but empty commitments are actually more damaging in the eyes of Gen Z than not promising anything at all.

Practice what you preach

“Greenwashing” isn’t just a harmful tactic for marketing products; it’s now polluting the unsubstantiated claims of many job adverts too.

″‘Greenwashing’ is very real and appears to be growing every day,” says Jason Dorsey, Gen Z expert and author of Zconomy: How Gen Z will change the future of business—and what to do about it.

“The reason is that Gen-Z — who is now up to age 25 — has made it clear that protecting the environment and combating climate change are a priority for them, not only as consumers but also as employees and even as shareholders and voters,” he said.

But just as Gen-Z is savvy to inauthenticity in the products they buy, this goes for their prospective employers too. The reality is: our world’s transitioning into new ways of working – so there’s going to be growing pains. But that also means it’s OK to admit you haven’t got everything figured out yet.

“If your brand is not fully where it wants to be on the sustainability front, acknowledge that — Gen-Z will appreciate and value your honesty and authenticity,” says Stephanie H at Gen Z Insights.

Essentially, employers should highlight their vision of where the business is trying to go – along with its corporate responsibility to employees. Glassdoor has offered some helpful advice on how to put this into practice.

“Does your company take pride in serving the community or safeguarding the environment? If so, make it clear on your careers website and in your job advertisements. Explain how – and why – you want to change the world. Always be honest, because Gen-Z candidates will likely research your company on sites like Glassdoor to verify your claims, before deciding whether to apply,” the company said in Gen Z: A Guide for Recruiters.

But some industries may need to work a little harder than others to change perceptions.

Turning the tide on the “techlash”

The Tech industry used to be a highly desirable destination for candidates – until it wasn’t.

Because according to a study by Pew Research, the percentage of Americans who felt the tech industry had a positive impact on society dropped from 71% in 2015 to 50% in 2019.

But why might the novelty of working in tech be wearing off?

Perhaps it’s a question of trust.

CNBC reported that job acceptance rates were down by as much as 50% after the Cambridge Analytica scandal.

But is there even more going on?

Tech companies like Facebook – or Meta as it’s now known – are quick to develop “solutions” that nobody asked for; the sentiment towards Zuckerberg’s digital Metaverse was mixed at best from a society that’s already spent the past two years physically disconnected.

Maybe it’s time for employers to look to Gen-Z for solutions; instead of claiming they have all the answers themselves.

After all, this is the generation that was born into a digital society. They’ve never known a world without mobile phones, smart devices, or internet-networked appliances. And that means they’re in the best possible position to support employers that might be struggling with this new, connected workplace.

“Gen-Zers bring with them not only a lifelong experience with the cloud, social media and mobile technology but – because they’ve known and adapted to this stuff since birth – are also open to more technology, more changes, more adaptations,” says Gene Marks for The Guardian.

According to a study from Dell Technologies, more than three-quarters of Zoomers say they would willingly act as technology mentors to colleagues.

This isn’t a generation that’s entitled; it’s one that’s looking to be empowered.

But without being too cynical, this can’t be the be-all-and-end-all for Gen-Z, surely. What about the small matter of – you know – pay?

According to research from employee engagement solution WeSpire, Gen-Z is the first generation to put purpose above salary. When comparing potential employers, these candidates read Mission Statements and Values documents to ensure their employer’s values match their own.

But this sentiment isn’t exclusive to first-time applicants.

Xero surveyed 1,200 small and medium-sized businesses and found that 41% of Gen-Zers in the workforce were more likely to be motivated by “values and purpose” than money. That’s compared to just 28% of respondents across all other age groups.

Now that’s not an invitation to pay this generation any less than they deserve – or even omit salaries from job descriptions. Instead, it’s a rallying cry for employers to put as much stock in the planet as they do their profit margins.

And hiring passionate applicants from this generation could help you achieve both.

So forget those misconceptions that this age group is “lazy” or unwilling to pay their dues; the Gen Z Spotlight Report actually found that 83% of respondents wanted to work for an organisation where they could make a positive impact on the world.

Just not at the detriment to their mental health. Because the report also found that 75% prioritised a healthy work-life balance – more than any other demographic.

Unfortunately, this appears to be at odds with reality. Worryingly, research by non-profit Mind Share found that 75% of Gen-Z workers had left a job at some point because of mental health reasons. What’s more, this age group also reported higher levels of anxiety and depression – even before the pandemic. We’ve written more about some of the problems Gen Z face in the workplace here.

But surely a generation raised on technology would thrive in the digital workspace of Zoom meetings and Slack channels, right?

In fact, there’s conflicting evidence about whether home or remote working is the key to happier Gen-Z workers.

One recent survey from Ten Spot revealed only 30% of Gen-Z wanted to stay remote full time. However, it also showed that 34% were “more productive and engaged” when working from the office

“…Gen Z craves belonging, purpose and meaning, which may account for the number that are desperate to return to physical office spaces,” says Paola Peralta, Associate Editor at Employee Benefit News.

So, what’s the answer?

Give them the ability to choose. This could form part of an employee value proposition – a must when looking to entice Gen-Z workers.

Use an EVP to show them what you’re worth

Above and beyond salary, an employee value proposition (EVP) is a unique set of benefits that an employee receives in return for their skills. It’s a great way to attract candidates and demonstrates the fact that you stand for something more than just the bottom line.

So, what should it include?

Well, according to Smarp, leaders in employee communications & advocacy, a good EVP includes:

Of course, this is just one component for a great job advert (we’ve got some more pointers for attracting Gen Z here) – and we understand that one size doesn’t fit all.

But the next time an applicant questions what your organisation stands for, just make sure your answer is more than a PR line. Because Gen-Z isn’t just searching for their own purpose, they’re looking for yours too.

Ready to hire? Head on over to our app to check out our talent pool of Gen-Z