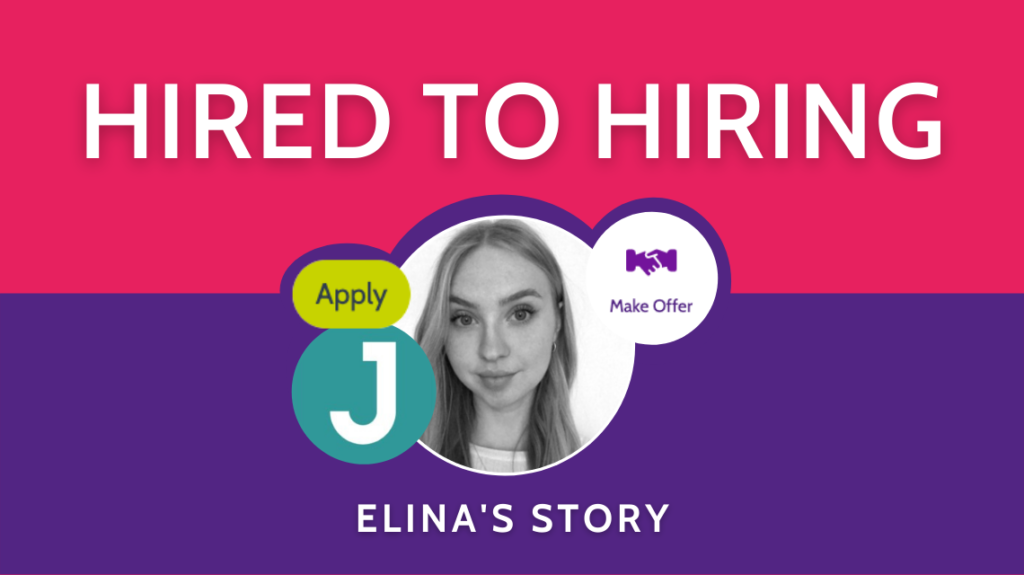 In early 2021 the team at Judge.me – an e-commerce product review app – were faced with perhaps the most exciting challenge for any small business: preparing for international expansion. They were looking to hire an organised junior to help manage HR and recruitment, and within only a few months Elina Ivaker has done just that.

She’s making a big difference, taking on multiple people’s responsibilities after only a few months in the role. Now that she’s helped her company take on new team members, we reached out to discover what it’s like to go from job hunter to hired, and hired to hiring.

Getting ready for growth

The summer of 2021 was monumental for Judge.me. They were preparing for international expansion following incredible success despite the struggles of 2020. They were focusing on growing their internal recruitment team so that it could look after the hiring, onboarding and management of lots of new employees.

So they needed a junior HR specialist.

The team at Judge.me reached out to DigitalGrads to find their new People Coordinator. They were looking for a junior with strong admin skills and an interest in HR.

Applying for jobs is draining at the best of times, but when you’ve been searching for a role for 8 long months it is especially difficult to keep up the momentum.

Elina Ivaker was volunteering with a charity while sending in her applications but still struggled to get noticed by employers: “Most of the time I would not even hear back from the jobs I had applied for. It was very tiring and time-consuming.”

But then she found DigitalGrads.

“I decided to create a profile and I am so happy I did.

“My job searching process completely changed for the better.

“I was able to apply for jobs easily and quickly, and I was guided through each step by the team at DigitalGrads.

“I was also able to speak directly with different employers which gave me a good feel for their companies.”

Soon after she signed up and created her profile, she received a message from the DigitalGrads team about a new People Coordinator role at Judge.me.

Elina was invited to complete a task and soon after received an interview invitation.

“I think the tasks you do before the interviews are great. As well as showing off your skills to the hiring managers, you also get an idea of what the job would be like and can decide if it’s something you would like to do.

“I had two interviews lined up within a few weeks of creating my account.”

And after only four weeks of being on the DigitalGrads Hiring Platform, Elina accepted her job offer.

After the hire: building teams at Judge.me

Elina joined Judge.me in the summer of 2021: “The first months on the job were challenging, but also very exciting. My manager was, and continues to be, so helpful and provides guidance when I need it.”

Her responsibilities quickly grew when a colleague of hers resigned, and Elina soon found her recruitment tasks mounting. So just 3 months after she started her new job, she returned to DigitalGrads to find another talented junior for Judge.me.

“It was interesting and strange being on the other side of things, but it was also exciting! It was great talking to all the different people, seeing what skills they had and if they would be a good fit.

“In this case it was for a Junior Developer role so we were looking for candidates with relevant experience using Ruby on Rails.

“After the screening interview we asked them to do complete a logic test, and if they passed this they moved on to a coding challenge. This gave the hiring manager a better idea of how they would perform in the role.”

After Elina conducted the initial interviews and asked candidates to complete the two-part task, she passed the candidates onto her colleague for the final decision.

“It was great to help another job hunter find a role and it is always exciting seeing the company grow”.

Since hiring someone new through DigitalGrads, Elina hasn’t stopped helping Judge.me grow their team: “At the moment I am mainly sourcing candidates and advertising for job openings.

“I’m really enjoying the job and looking forward to gaining more experience and confidence in the role.”