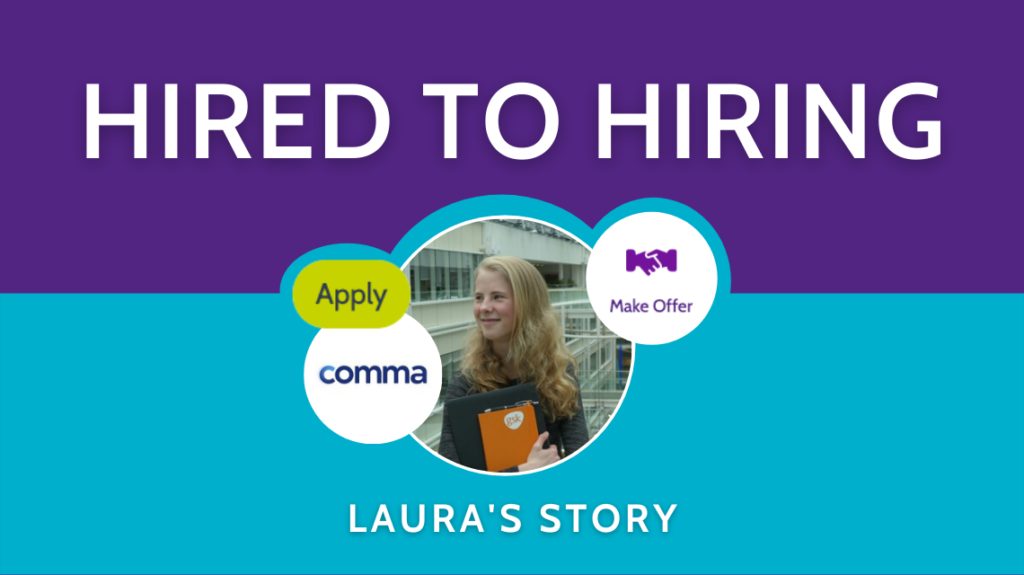 When the Founder and CEO of Comma – a new Fintech app designed to automate payments – met Laura in a job interview, he knew that her enthusiasm for finance was just what he needed as his first business development hire. Almost a year later, Laura’s team has grown from a one-woman band to four people strong thanks to her help.

She built the role from scratch, learned on the go and helped hire her colleagues within a few months of graduating. Now that she’s seen behind the veil, we reached out to discover what it’s like to go from job hunter to hired, and hired to hiring.

In the summer of 2020, Comma’s small team of three began reaching out to their ideal clients for the first time. The feedback they received was incredible but it unveiled a hole in the business: they needed someone to do this full-time.

They needed a Business Development Lead.

Comma reached out to DigitalGrads to find their first business development hire: a friendly graduate with a keen mind and some knowledge of accounting.

Hunting for a job was daunting for BSc Mathematical Sciences graduate Laura Smith, even though she left the University of Bath with a great degree and a placement under her belt.

“I put off job hunting until after I graduated because I wanted to focus on my studies and exams, but it seemed like I’d waited too long”.

Laura suddenly became one of the thousands of job hunters vying for a junior role in 2020.

“Because of Covid the job hunt was very much online, which means that it’s just you on your own in front of your laptop for hours on end.

“I’d find lots of opportunities but think: can I do this job? Who knows!

“Most of the time no one would get back to me either, so I didn’t even know which jobs were on the table.

“I was searching for a job for around three months, using different sites when I found DigitalGrads.

“It was instantly less overwhelming because the opportunities were limited. I found it easier to choose the right job that matched my skill set.

“Using DigitalGrads was so different: it wasn’t daunting. It was quick and personable.”

Laura discovered the Business Development Executive vacancy from Comma and applied right away. And after answering some questions from our recruitment team, she prepared for her interviews, getting ready for a mock sales call.

So after three long months of applying for roles, Laura received her job offer.

After the hire: building the business development team

Laura started her job in the final months of 2020: “Unfortunately I actually caught Covid just before my start date so I had to join the team remotely!

“This wasn’t part of the plan but I managed to get to know everyone through Zoom just fine. Settling in was easy!

“I actually had a lot of freedom as no one had been in that role before me. I created the rules as I went, learning as much as I could online and the rest by trial and error. It was hard but I enjoyed it!”

Five months after Laura started, Comma returned again to build her a team.

“Before I was hired we didn’t know the exact skills you needed to be in business development at Comma because it was a brand-new role. But after I had been there we could get specific.

“We knew that we didn’t need a general salesperson.”

After DigitalGrads completed the initial screening and Laura’s colleagues conducted the first round of interviews, she stepped in to help with the final round.

“It was weird to see it from the other side. I realised that interviewers aren’t trying to catch you out.

“They’re looking for your best skills just like I was.

“I was paying attention to two things: culture fit and the skills that I learned we needed.

“I helped out towards the end of each interview, trying to fill the gaps. There were a few times when a candidate didn’t quite demonstrate the skills we were looking for, so I asked questions that pointed directly to those skills to give them a second chance to impress us.

“After the interviews I talked with my colleagues, discussing the pros and cons of each candidate and tried to build a well-rounded team.

“We ended up hiring two people, Katie and Calum.

“They were both great candidates and complemented each other really well. We could see that they would make a well-rounded team.

“It felt really good to be part of the process and welcome more people to Comma – I almost felt like I was letting Katie and Calum into a secret!

“Because we selected them for their skills it’s been great to see those develop and grow just like I did. I’ve seen them both shape the company in a positive way and make a big difference.”

A few months after welcoming Katie and Calum, Laura decided to try something new.

“I moved roles around two months ago. I left the sales team – which is now four people strong – and now work in the technical support team! I’ve created this role myself too and it’s really great to be learning new things every day.

“Comma is a place I want to stay – it’s not a stepping stone for me. There are so many opportunities to move roles and learn and grow.”