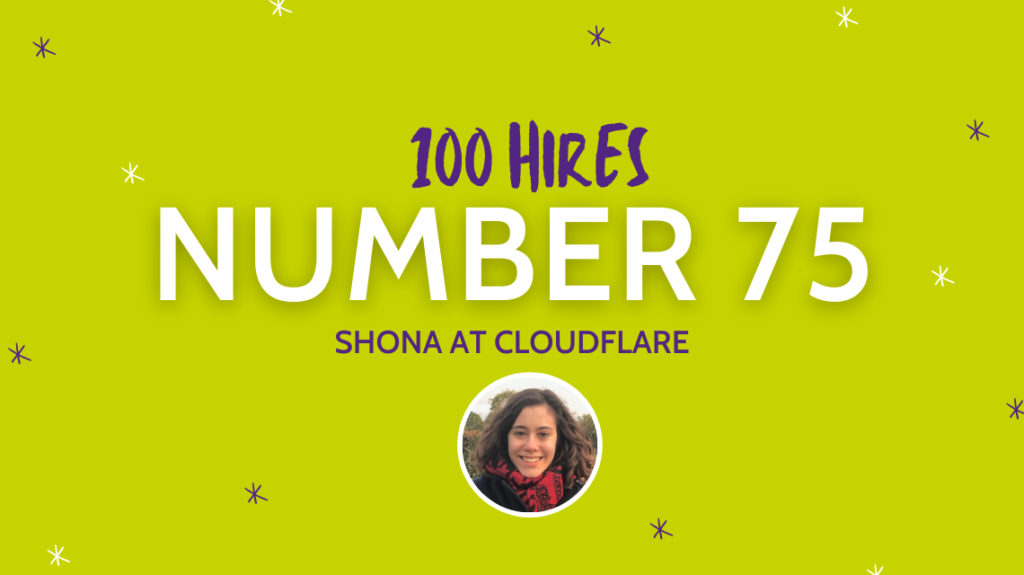 After feeling lost in the job hunt, Shona found her dream business development role at an exciting tech company.

“Graduate job hunting for me was initially very challenging.

“When you don’t have a full-time job and that’s what you are focused on, your life is quite limited financially and practically.

“I came into the job market with only vague ideas of what I wanted to do.

“I had considered roles from previous dips into the workplace when I worked for family friends, as well as looking at the jobs from those around me as starter ideas, but had nothing fixed.

“My degree, History and Spanish, didn’t necessarily lead to clear professional paths either.

“In some ways, this made job hunting quite hard, as it meant I was applying for anything and everything that took my fancy without really knowing if it was something I really wanted to do.

“I found it hard to focus and narrow down.

“Ironically enough, Kristina from DigitalGrads wrote to me on LinkedIn right when I had graduated from university asking if I had considered roles in tech, but I ignored it.

“I had this big idea that to work in tech you had to be analytical, good with numbers, be able to code and I wasn’t really those things.

“It was very much out of my comfort zone.  However, much later on, there was a job advert that had been reposted by someone who was a mutual connection of Kristina, so it came up on my feed.

“The job was perfect (I had since narrowed down what I wanted to do!) and I immediately knew that I had to apply.

“I immediately found Kristina’s original LinkedIn message and apologised to her!

“If this tells you anything, it’s not to be intimidated – industries like finance, law, tech, science and so on might seem very unfamiliar but that doesn’t mean you’re not capable of doing something in that industry, or that it doesn’t have a role that’s right for you.

“This story should also tell you that if you are in need, say ‘yes’ to everything and everyone because you never know who or what might hold the secret key to what you’re looking for!

“I really enjoyed working with DigitalGrads. Their online training courses about basic business skills and roles was really useful.

“Even if you have work experience, it helps give an overview of what it might actually be like working in that industry, so it’s great to have that background whilst applying.

“I also found that Kristina – who was the main representative from DigitalGrads I worked with – struck the balance very well in the support she gave me.

“I had worked with quite a few recruiters in my year of trying to find the perfect job. But Kristina let me be independent in how I dealt with the recruitment process. And at the same time, she could be very responsive if I needed advice or encouragement from her.

“In the end, I actually got the job I applied for!

“I’m a salesperson for Southern Europe (if we strip away the fancy job title) at a tech company called Cloudflare.

“I’m in my fifth month at the company now and have had talks of being promoted already.

“I recently found out that Cloudflare only hires 2% of the candidates that apply to them, so it’s a privilege to be here.

“It does sound cliché but if DigitalGrads hadn’t acted as the ‘introducer’, I don’t think I would have my job today. My company has a very strict hiring process and uses very few outside recruiters.  I’m lucky to have got where I am today.

“Don’t get me wrong, full-time work is tough, but my company has a lot of perks if you perform well.

“I love my job, the people I work with and the tech industry – who would have thought?!

“And as for my future, I shy away from the word positive. I know that in my type of role people can come and go quickly as it is incredibly target based.

“I would put a lot of emphasis on the word ‘hopeful’ though – I have been lucky enough to have received world-class sales and technical training with my company, have an amazing manager and work in a forward-thinking company where progression can be achieved very quickly if you do well.

“To any job seekers out there – don’t give up hope!  You’ll get there

“Many thanks to DigitalGrads for supporting me on my journey here – my success is your success!”

Anna Wolf, Recruiter at Cloudflare on hiring Shona and working with us

“We had a great and successful partnership with the DigitalGrads Academy hiring a number of talented individuals into our Business Development Team in the UK.

“The DigitalGrads team has been very helpful to support us during this year’s recruitment phase, providing a pool of candidates that had been pre-screened and had completed Business Development training. This has allowed us to hire diverse new grads that are interested to kick off a career in sales.

“We hope to continue working with the team in the future!”